Plenty of Walks in Glasnevin!

One of the drawbacks of living in Glasnevin is that there are so many beautiful walks in the area, one may never want to go anywhere else.

Dublin is said to be a city of villages (including Phibsborough, Finglas, Rathmines, Rathgar, Templeogue, etc). These were once separate entities until urbanisation joined them all together. Glasnevin is one of those villages, now an inner suburb of Dublin. 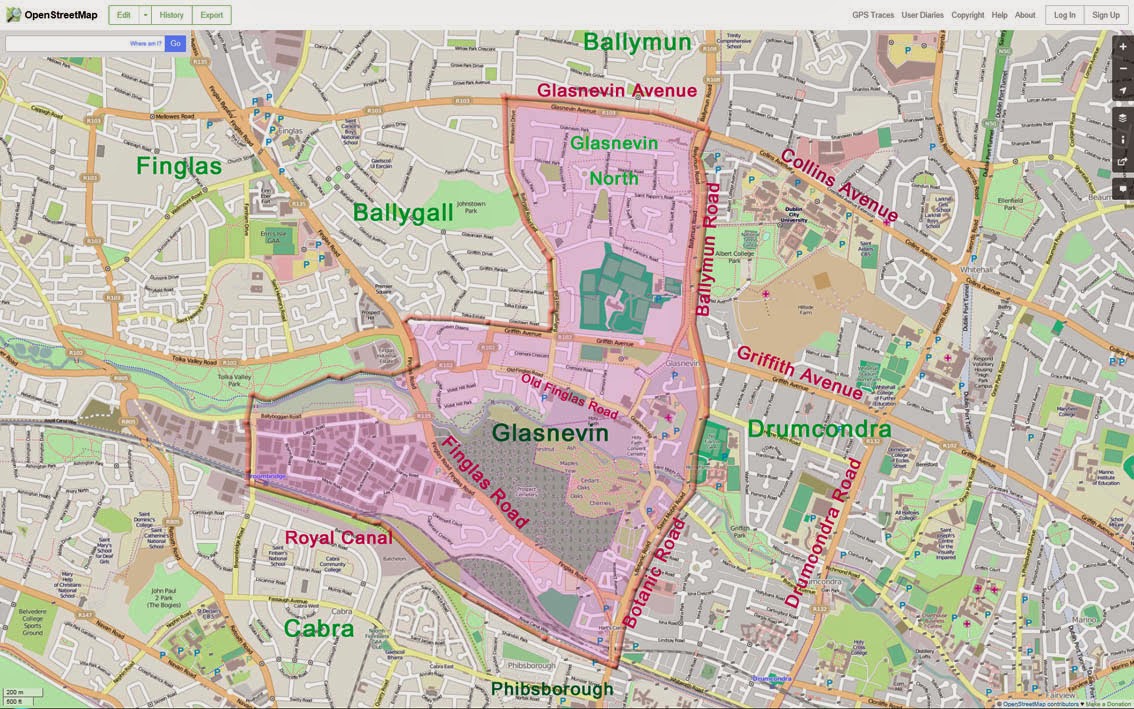 Our walks usually begin at the main gate of Glasnevin Cemetery - the gate directly in front of the  O'Connell monument.  This is just a matter of convenience for descriptive purposes, and the reader can choose any other starting point he wishes.

Our starting point is easily recognised, for the O'Connell Tower is an iconic
landmark. It has the shape of a round tower and was the highest monument in Dublin before the Spire in O'Connell Street. (Three monuments were being considered at the same time in the 1850s, one for O'Connell, one for Wellington and one for Nelson. The three committees all agreed that the monuments would be the same height. However, when the O'Connell monument was nearing  completion, the scheming committee decided to add a few extra feet. Besides being the tallest monument in Dublin, it is also at the heighest point. From the top, when the stairs are re-constructed in the near future, there is a magnificent view stretching from the Cooley Mountains in the North to the Dublin Mountains in the South). 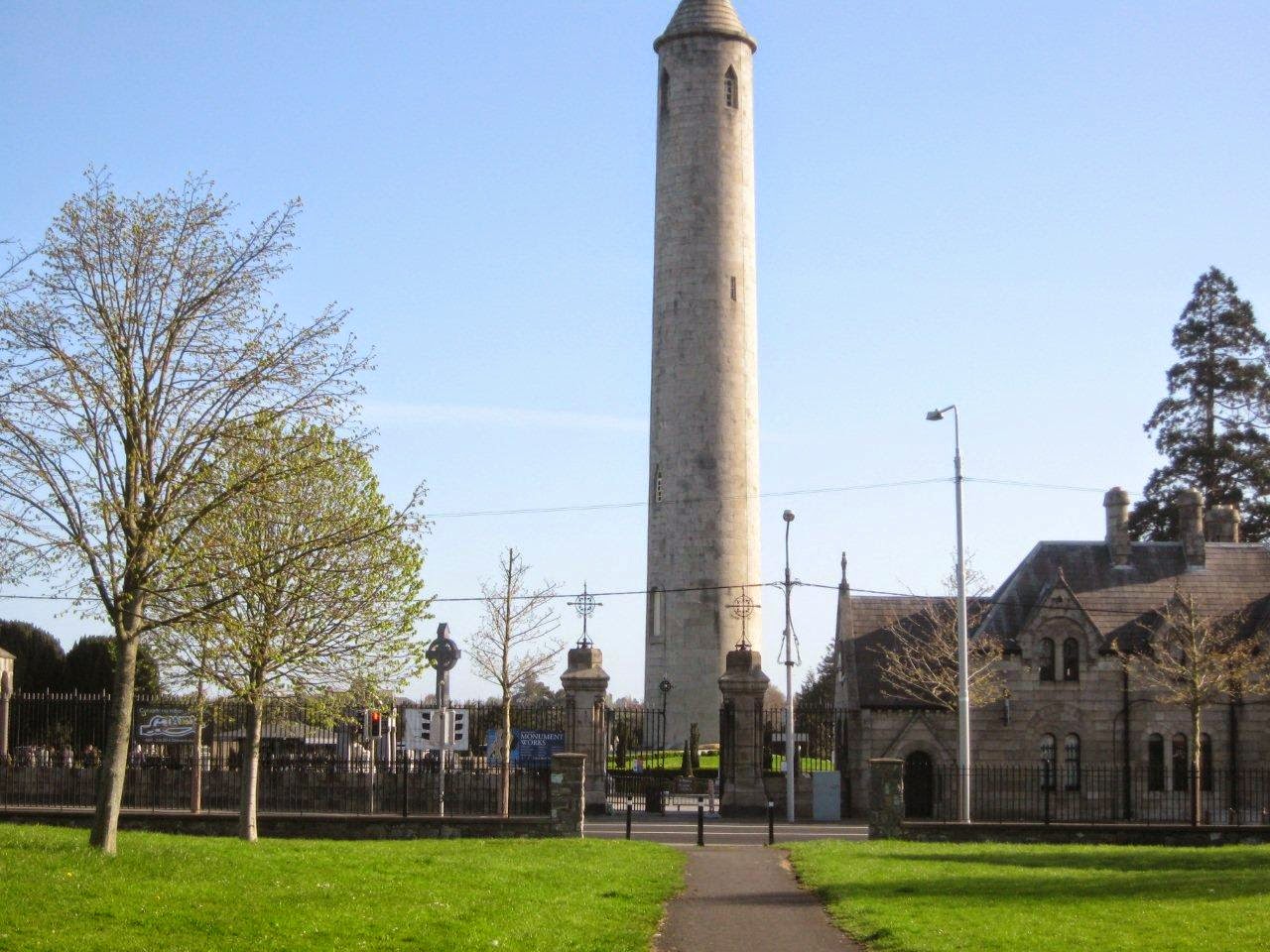 To get here, take a 40,  140 or 40D Bus from O'Connell Street or Fingles and get off at "Finglas Road/ Claremont," which leaves you beside the starting point. Alternatively, take a 4, 9 or 83 bus to Hart's Corner, a three minute walk from our starting point.

Features around our Starting Point

To the right of the main gate is the old Gate Lodge and offices and to the right of that a gate for motorised traffic, and then the book-shop, museum, new offices and café-restaurant. To the left is the Sigerson memorial, the sarcophages of some of the bishops of Ireland and the cemetery church.

Across the road, you see the fine park and housing estate of Clareville.

If you are meeting others, the Tower Café and Restaurant attached to the Cemetery Museum (to the right of the main gate) offers a suitable meeting place. Alternatives include the café of the Topaz petrol station across the road (a hundrred yards from the gate), or local hostelries such as the Grave Diggers (Kavanagh's), the Botanic House or the Brian Boru (Hedigan's) pubs, or, if you are not meeting at our starting point but in the old Village of Glasnevin, at the Botanic Gardens Café/ Restaurant or McMahons of Botanic Avenue, an atmospheric  bakery/ coffee shop.
Posted by Krunchie Killeen (Proinnsias Ó Cillín) at 01:09 1 comment:

Support my blogs by making a small contribution 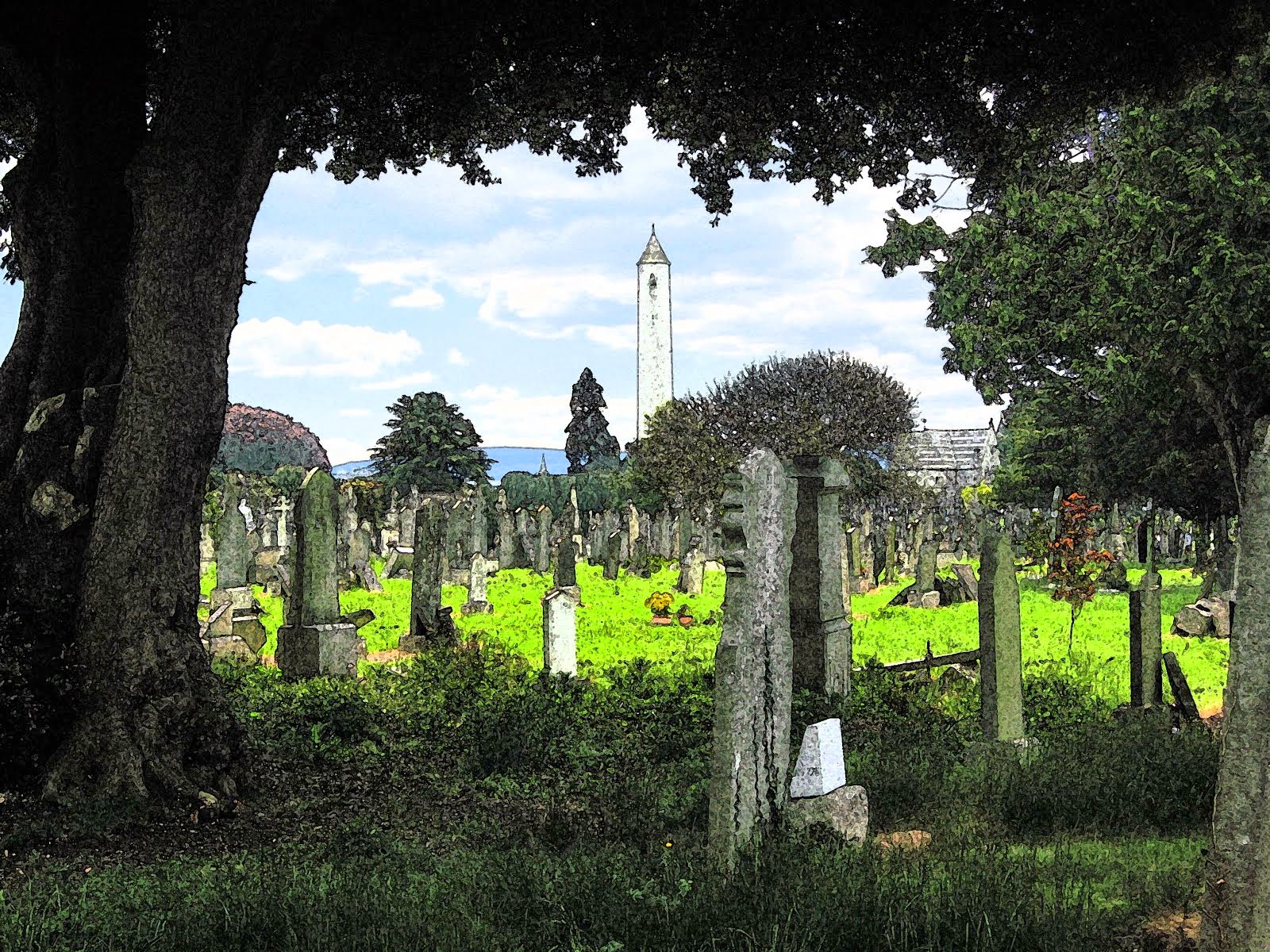 A History of Glasnevin: Its Village, Lands and People

Dead Interesting: Stories from the Graveyards of Dublin (Glasnevin Trust)

Glasnevin House: A Sense of Place